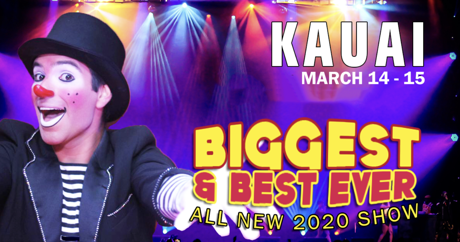 Legendary Circus Producer, Tuffy Nicholas, is bringing the All-New Super American Circus to Guam and Saipan in 2019! After last year's sold-out performances on their inaugural tour of Hawaii, the Super American Circus has performed in the US mainland cities of Tampa and Kissimmee, Florida. Tuffy is the son of Count Nicholas, the world-acclaimed ringmaster, who performed for Ringling Brothers Circus for nearly three decades and was inducted into the Circus Ring of Fame in 2016. For over 35 years, Tuffy has been a successful producer and promoter of Circuses, Concerts, Festivals and Sporting Events around the world. Since 2000, as president and CEO of Global Entertainment Productions, Mr. Nicholas has produced over 5000 performances around the World. Moscow State Circus, Modern American Circus, International All-Star Circus are just a few of Mr. Nicholas’s productions. In 2005 he produced Cirque Hawaii, a multi-million-dollar, state of the art, permanent theatrical spectacular, that showcased the award-winning talent of over 35 performers from around the world and thrilled Hawaiian audiences! Tuffy will make a proud return to Hawaii in 2020 with an entirely new show with some of the world’s most dynamic Circus Superstars! Be sure to see this show when it’s in your area! It will be 90 minutes of pure energy and excitement. Click Here for more info