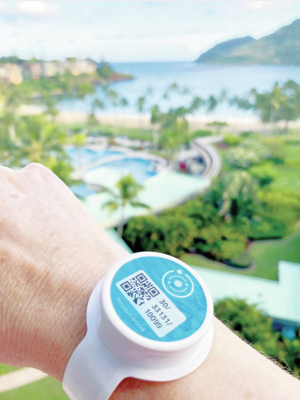 Gov. David Ige is set to approve a voluntary “Resort Bubble” program on Kaua‘i in the hopes to bring tourism revenue back to the county this week. The “Enhanced Movement Quarantine Program,” more commonly known as the “Resort Bubble,” will have safety policies to protect employees and guests all while allowing quarantined travelers to take advantage of the resort property, including pools and on-site restaurants. This is Mayor’s Emergency Rule No. 16. “Because the virus continues to threaten our communities, we don’t know when the mandatory quarantine can be lifted,” Mayor Derek Kawakami said Monday. “As we’ve learned, this virus does not follow specific dates in the calendar, so we have to be ready to adapt and adjust.” Guests will be outfitted with an electronic bracelet called AQUA (Active Quarantine User Ally) by the company Hub Culture. Using geofencing technology, guests will be under an electronic quarantine that will monitor their movement on the property using GPS and Bluetooth signaling. If a guest were to leave the property or tamper with the bracelet, the tracking service would alert hotel security and the Kaua‘i Police Department. Kawakami said the bubble is “not the final solution, but a tool” to bring in tourism. Further, he said this is an “added tool, not a replacement” to the state-mandated two-week quarantine that is currently in place through the end of this month for inter-island and trans-Pacific travelers. Kawakami said he’s “still supportive” of the quarantine and the state’s proposed  pre-travel testing program that is supposed to launch October 1. Yesterday, Ige told The Star-Advertiser he expects to again delay reopening. “At the same time, we understand the need to address the economic hardship facing our tourism-based community, while also preserving the safety of our residents,” Kawakami said.

Resort employees will also be subject to rules and guidelines, including social distancing and masks.

Hawai‘i currently has the highest “insured unemployment rate” in the nation for the week that ended August 22, according to the U.S. Department of Labor last week. This insured unemployment rate represents the number of people receiving unemployment insurance as a percentage of the labor force.
Hawai‘i’s insured unemployment rate was 20.3% for the week ending Aug. 22 was followed by Puerto Rico at 16.7% and Nevada at 16%, according to the U.S. Department of Labor. The state’s seasonally adjusted unemployment rate was 13.1% in July. Last Thursday, the state has seen 282,897 claims filed statewide, with 174,233 claims paid, according to the state. Yesterday, the Hawai‘i Department of Health reported 80 new positive cases in the state. This includes one new case on Maui, two cases on Moloka‘i, seven on Hawai‘i Island and 70 on O‘ahu. Kaua‘i does not have any active cases but has five people on a close contact quarantine for a case reported on O‘ahu. As of Monday, the state recorded 6,987 active cases statewide, with a total of 3,693 patients classified by health officials as “released from isolation.” This brings the state’s cumulative total to 10,779 cases statewide. One previous case was removed due to updated laboratory information. Article written by Sabrina Bodon The Garden Island