Over 600 cats and dogs make their way to Mainland 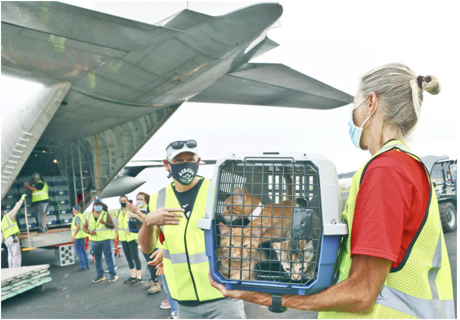 Wednesday afternoon, 302 furry friends jetted off Kaua‘i toward their new furry futures on the Mainland. Flown out of Gate 30 at the Lihu‘e Airport, the efforts made by the Kaua‘i Humane Society in partnership with JR Peterson Foundation, Greater Good Charities, and Wings of Rescue, marks the largest pet rescue flight in history. The flight originated out of Lihu‘e, and went on to the rest of the Hawaiian Islands, to pick up over 600 dogs and cats. At the airport, KHS volunteers made an assembly line Wednesday afternoon, handing crates of cats and dogs off of two trucks to pallets to be placed onto the Hercules C-130 plane. Part of the shipment included kittens as young as seven weeks old to a decade-old dog, KHS Executive Director Mirah Horowitz said. Horowitz started in her position in October 2018, and in that time, the humane society has drastically reduced its euthanasia rates. KHS’s live release rate in 2020 for dogs was 96%, up from 89% the year before, and the overall shelter live release rate was 84%, up 16% from 2019’s 68%. “This kind of flight was unimaginable two years ago,” she said as she took a moment’s break from loading the animals onto the plane. “The change to life-saving is what makes this possible.” KHS has been overwhelmed by the pandemic’s effect on airline travel. Typically, the humane society relies on outgoing flights to transfer cats and dogs off the island to Mainland shelters with higher demand and low populations of adoptable animals. This time around, the shelters involved handpicked the animals they’d get, and by one estimate, the majority of these rescues will be adopted within three days, said KHS Development Director Tanya Ramseth.“It’s bittersweet,” Ramseth said. “We’re sad we won’t see them every day, but we’re so happy.” Since last week, Horowitz said over 50 volunteers have helped with this undertaking. All of the animals were spayed or neutered, given all their proper vaccines and health check-ups. Crates were color-coded specific to the various shelters that’d pick up the pets and tagged with identification information. Animals were tucked away with bedding, water and some other comforts. “It’s a massive effort,” Horowitz said. “Staff and volunteers have been amazing. They were here at 8 p.m. yesterday and back at 8 a.m.this morning. I’m so proud.” KHS Boardmember Mindy Smith helped load the animals into the plane Wednesday. “Staff has been working on this for weeks,” Smith said. “This went as smoothly as possible.” The pets will arrive at Seattle’s Boeing Field Thursday morning, where pet shelters and rescue groups will collect them. About 120 will then continue onto Walla Walla and Coeur d’Alene. Hawai‘i shelter partners include Kaua‘i Humane Society, Hawaiian Humane Society, Lanai Cat Sanctuary, Hawai‘i Island Humane Society, Maui Humane Society, Aloha ‘Ilio Rescue, and Kaua‘i SPCA. Kahu Wayne Vidinha of Akua Mana Church offered a blessing before liftoff. “It's great to let somebody love them somewhere,” he said. Written by Sabrina Bodon Dennis Fujimoto The Garden Island