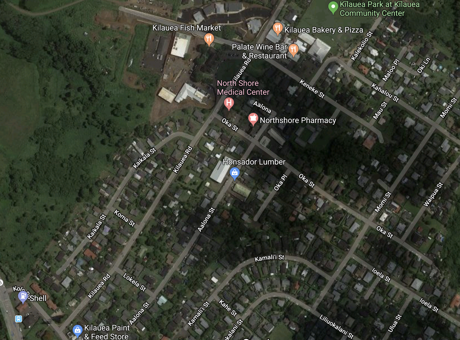 For at least 10 years, people who live in or pass through Kilauea with any frequency have been aware that Kilauea Road, the main artery through town, which carries not just local traffic but hundreds of thousands of vehicles per year taking tourists to the Kilauea Lighthouse has been in a state of continuous deterioration. Until some interim light resurfacing work began a couple of months ago, Kilauea Road has been a steadily worsening collection of potholes and broken pavement. In the recent past, some of the potholes had advanced to axle-breaker status. A complete rebuild of the street has been in the planning stage for some time. At the moment, full reconstruction, including possibly a roundabout at Kolo and Kilauea Roads, other so-called multi-modal improvements and construction of a multi-use path that would run all the way from Kilauea Town to the lighthouse, is scheduled to possibly occur in the 2021-22 fiscal year.
About five years ago, during the early stages of the planning and construction for the newly opened Ahuimanu shopping center in Kilauea, the situation on Kilauea Road was supposed to be of secondary importance since there was a plan at the time for a new entry road to Kilauea Town to be constructed from Kuhio Highway to the new shopping center location. But that project fell by the wayside after the Hawaii Department of Transportation altered its statewide priorities to emphasize catching up with a multi-billion-dollar backlog of maintenance and repair projects. Although a zoning adjustment had been agreed to, in which Kilauea landowner Bill Hay would convey land for the new road in exchange for approval of a subdivision request, the road project stalled.
Earlier this year, the county committed to a makeshift solution, which was to lightly resurface parts of Kilauea and nearby Kolo roads just enough to get through the next couple of years until the major reconstruction can occur. Part of the project was necessitated by opening of the shopping center, which was required to add turn lanes near its main entrance. The project is about half done, but an unanticipated side effect has emerged. Some Kilauea Road residents and others in the community have noticed a marked uptick in the speeds vehicles now travel on Kilauea Road. With the number of potholes in the roadway prior to the repaving, such speeds were not possible. Now, according to residents and confirmed by simple observation, vehicles are driving much faster on Kilauea Road than they did, say, four or five months ago.
All of this leaves the situation disturbingly unsettled. Kilauea Road was in unacceptably poor condition. But the light resurfacing underway may have had the unintended effect of encouraging people to drive at unsafe speeds. All of this is occurring as the shopping center’s first stores are opening. Traffic volumes on Kilauea Road are bound to increase and trucks delivering to the shopping center will be increasingly common. KPD may have the best means to prevent an unfortunate traffic crash that injures or kills someone in the form of targeted speeding enforcement by cops using radar. The department, of course, lacks the manpower to sustain that kind of program for very long and can rationally only be expected to commit to it sporadically. More and permanent radar speed signs might also help. But for the moment, the best outcome is one that will rely on KPD and it's already limited resources. It, of course, goes without saying that the very best solution would be for everyone who drives on Kilauea Road to resist the temptation to go too fast that the fresh asphalt has created.