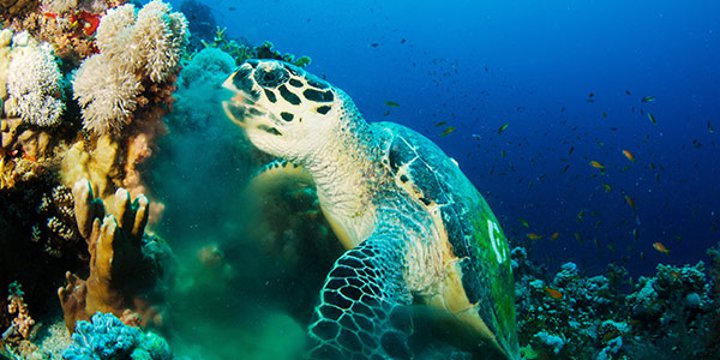 Underwater videographer Terry Lilley said he had a recent surprising encounter in Hanalei Bay while diving to check out reef health at a place known as “the bowl.” He was joined by a young hawksbill turtle, he said “only the fifth one I have ever seen on Kaua‘i after 20 years of diving here.” Hawksbill turtles are endangered and protected under the federal Endangered Species Act. They are smaller than green sea turtles, and have a unique beak and a beautiful shell. According to the Maui Ocean Center, the majority of the hawksbills in the state live near Hawai‘i Island, and a few live on Maui and Moloka‘i. The National Oceanic and Atmospheric Administration says they monitor 20 to 25 females who nest annually on Hawai‘i Island. NOAA Fisheries says hawksbill turtles can be found throughout the Atlantic, Pacific and Indian Oceans, but loss of reef habitat has affected population numbers. Hunting has also led to the ESA listing of the species. Lilley was thrilled to see the endangered turtle at Hanalei Bay, but said he was just as excited to see “hundreds of new antler corals” near the bowl. “Some were already 15 inches tall, and these corals have made a whole new habitat for marine life,” Lilley said. “These corals are so important, as they grow up to three foot tall and are what make the wave hollow at the bowl.” Signs of healthy coral are being seen all over the island, according to citizen divers and reports from the state’s aquatic team, which has been doing underwater monitoring in ‘Anini Bay and has observed signs of recovery since coral disease was recorded in September 2019.